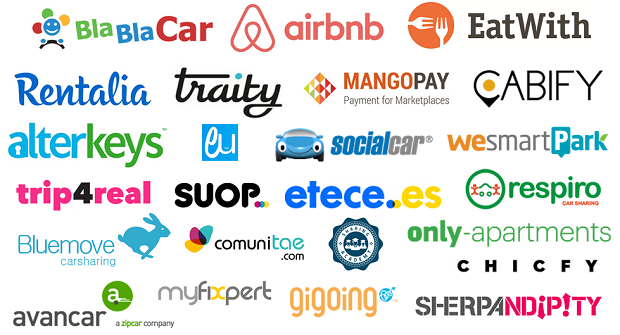 UBER case (II): a backing for the collaborative economy

The Opinion of the General Advocate Mr Maciej Szpunar before the European Court of Justice (CJEU) in the case of UBER, which we provided a summary of in our previous post, not only says nothing new about the collaborative economy, but also provides a backing for this new economy, much on the contrary to those who – defending the interests of traditional companies – have hastily cast them into the same basket as UBER, causing tremendous confusion among citizens who are not experts in these matters.

On what basis do we say that the Opinion of the General Advocate back the sharing economy? This is apparent in the points we quote below, although we shall first take time to remember the basic scheme of the sharing economy and the prior pronouncement by the European Commission in 2016.

1.  Starting point: difference between the electronic service and the underlying physical service

In our post on the legality of P2P platforms, we explain the difference between the two basic business models described by the European Commission in 2016:

2.  The European Commission backed the sharing economy and already warned the business models unrelated to it.

“is a phenomenon that creates new opportunities for consumers and entrepreneurs, and that may thus contribute to employment and growth in the European Union, if encouraged and developed in a responsible way. For prosumers, the collaborative economy may bring new job opportunities, flexible ways of working and new sources of income. For consumers, it may provide the advantages of new services, increased offer and lower prices. For the economy at large, it may also promote more widespread sharing of assets and more efficient use of resources, that may contribute to the sustainability agenda of the EU and transition to the circular economy”.

With regard to collaborative platforms, the European Commission distinguished:

3. The UBER case: The Attorney General backs the Collaborative Economy and places UBER outside of it.

To what extent does the Attorney General back the Collaborative Economy?

1.First of all, when defining the concept of mixed service from the digital point of view. Something novel and that had not previously been done by the European Commission. Thus, all digital services that partially involve an electronic service are considered by it to have mixed service status. In which is that not the case nowadays, we might ask ourselves. However, what is interesting about this definition is perhaps not so much the actual concept, but rather how it is resolved by the Attorney General: in the sense that he distinguishes two essential aspects of these:

Thus, it is in the second case when the above distinction becomes most relevant, as if the service is considered a single one and one of its aspects is prevalent (either the electronic or the underlying service), all this already provides the direct reply regarding the issue of the legal status of the platform concerned.

In the case of UBER, the General Advocate reaches the conclusion that it is a sole service and that the main nature of the activity by UBER is in the underlying service, precisely because UBER (i) has a high level of control over the drivers in its platform an because (ii) it acts as an organiser of that underlying transport service, so it is the transport that provides the financial sense to its operation. However, we already analysed this in our previous post.

The relevant fact for the purposes of the sharing economy is that, once more, we have specific recognition that it is possible for there to be collaborative platforms that only provide an information society service, without necessarily providing the underlying service.

Now – as a reductio ad absurdum – if all collaborative platforms were to provide the underlying physical service (of transport, accommodation, meals, etc.), for what purpose would the Commission have declared that, as a general rule, they only provide an electronic connection service, that may be framed as an information society service? And why would the General Advocate have had to make such an effort to distinguish the legal status of UBER if they all did the same? It is thus a serious error to consider that all platforms in the sharing economy are in the same basket as UBER, which is only an online platform and does not belong to the collaborative economy (as stated by its Directors in their own words).

2. Secondly, and in relation to the preceding point, another characteristic inherent to the economy platforms to which the Attorney General refers lies precisely in affirming this in the case of UBER, on the contrary to collaborative platforms, is the fact of the control the platform has over the users who provide the services.

As we stated before, the European Commission cited a series of cases in which one may suppose a level of control exists by the platform over the users who provide the services.

The Attorney General only bases his argument on the first two to affirm the control UBER has over its drivers: setting the price and the essential conditions of the underlying service, in spite of not having ownership of the vehicles, specifically declining to enter into analysis of the labour status of the relation with the drivers. His argument is as follows:

The figure of electronic intermediation under our law has been studied by Professor Isabel Rodríguez Martínez:

“The intermediation service provided by collaborative platforms consists of providing the different users offering and the receivers an organised electronic system through computer applications, that integrates a set of services, among them communication and information, developed from mobile and GPS tools and technologies, the purpose of which isto display the best offers, by search and subsequent automated matching of the service or product demanded to the user seeking”. “What is thus provided is a true intermediation service to facilitate electronic contracting between users – offering and demanding – goods or services who access the platform. It is, definitively, a mediation service between two parts who are potentially interested in entering into a contract, the underlying contract.” “The object of the contract between the platform and its users has the purpose of intermediation in contracting the underlying service, thus allowing the users to access the platform and host their offers and demands for the different underlying servicesand deliveries of goods or money.”

4. And with regard to the innovative nature of new technologies in the sharing economy, the Attorney General continues by pointing out a major difference in the case of UBER: the end for which the new technologies are used: that is, either just for connecting the users, or as part of an integral service that includes the underlying service.

64. It is true that the innovative nature of the Uber platform is to a large extent based on the use of new technologies, such as GPS and smartphones, in order to organise urban transport. However, the innovation does not stop there: it also extends to the organisation of the transport itself, without which Uber would be a mere taxi booking application. Accordingly, within the context of this service, it is undoubtedly the supply of transport which is the main supply and which gives the service economic meaning. Users look for drivers with one aim in mind: to be transported from A to B. Hence the connection stage is merely preparatory in order to enable the main supply to be performed in the best possible conditions.

65. Thus, facilitating connection between passenger and driver is not autonomous or principal with regard to supply of the transport. Consequently, it cannot be classified as an ‘information society service’. […]

Thus, while platforms that act as mere intermediaries in the electronic service of the information society service only provide a service for connection by automated offer and demand search and automatic matching, in the case of UBER that connection is only part of the transport service.

5. Lastly, and although with a notably juridical nature, one may emphasise how the General Advocate recognises that the information society service is included within the framework of the services Directive, so it becomes apparent that:

Like any service, information society services that: (i) may not be submitted to authorisation regimes, and much less if they do not fulfil the requisites of need and proportion to the objective of general interest pursued and (ii) that such restrictions may only be imposed when they are justified for exceptional reasons of public order, public health, public security or protection of consumers.

Thus, all platforms in the sharing economy that just provide an information society service are protected from such restrictions, as was already recognised by the European Commission in its Communication of 2nd June 2016:

“In addition to creating new markets and extending the existing ones, sharing economy companies enter markets attended up to present by traditional service providers. A key matter both for the authorities as well as operators on the market is whether, pursuant to the current legislation in force in the EU, collaborative platforms and service providers may be subject to the requisites of access to the market and, in such a case, to what extent. Those requisites may include authorisations for the corporate activity, obligations linked to granting licences or standard minimum quality requisites (e.g.: the size of the rooms or the type of vehicles, insurance or deposit obligations, etc.). Pursuant to the EU legislation, such requisites must be justified and proportional, taking into account the specific natures of the corporate model and the innovative services concerned, without favouring one business model over an other.”

In that same Communication, the Commission provided a reminder regarding another essential requisite (that, however, the Attorney General does not mention for UBER) that in order for that information society service to enjoy the waiver of liability the Information Society Services Directive grants it with regard to the content hosted on its web, it is necessary for its role to be purely technical, automatic and passive.

4.  The Spanish Courts had already backed the sharing economy

In case all this amounts to little, there were already two clear precedents in Spanish case law that emphasise the status pure collaborative platforms have as mere intermediaries in the cases of:

(i)BlaBlaCar, by virtue of the Judgement of 2nd February 2017, by Commercial Court number 2 of Madrid (that we previously analysed in our post) and in which the Judge only denies that the action by the platform BlaBlaCar is liable to be included in legal regulation of transport, but rather clearly emphasises that “it rather constitutes an activity inherent to the information society”, and in the case of

(ii) Airbnb, by Judgement of 29th November 2016, by Contentious Administrative Court number 11 of Barcelona (that we analyse in this other post), that emphasises that “the activity performed by the appellant is starting up an operating service for an online technological platform that connects private parties who wish to share homes for a price in relation to tourist accommodation (…) that “consists of a mediation or marketing activity”.